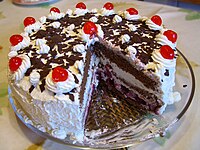 Black Forest cake (German:Schwarzwälder Kirschtorte) is a German layer cake. It is made of chocolate cake layers with whipped cream and cherries between each layer. It is decorated with more whipped cream, cherries, and chocolate shavings.

A true Schwarzwälder Kirschtorte is flavored with Kirschwasser, a clear German liquor distilled from tart cherries. The cake was first mentioned in print in 1934, and has been closely associated with the city of Berlin.