The Bir Tawil refers to a portion of land in between Sudan and Egypt. It is best known as one of the last pieces of land on Earth that does not belong to any country, nor claimed by a country.

In 1899, when Sudan was part of both the Khedivate of Egypt and the United Kingdom, the border was set at the 22nd parallel north.

The red line shows the 22nd parallel north (between Egypt and Sudan
but the border was redrawn in 1902 to reflect on tribal usage of the land. Today, the other territory, the Hala'ib triangle, is "de facto" Egyptian territory but the government of Sudan says that it is their land.

While there are several roads and villages in the Hala'ib triangle, the Bir Tawil consists entirely of uninhabited deserts and mountains. Because claiming the Bir Tawil would undermine the other claim, the land is unclaimed by either country. In 2014, an American man claimed the land as the Kingdom of Northern Sudan as a birthday gift for his daughter, but this claim is not recognized by any government. Later, an Indian man claimed it as the Kingdom of Dixit, but the man who previously claimed it has stated publically he believes that Dixit is lying and did not actually reach the Bir Tawil. 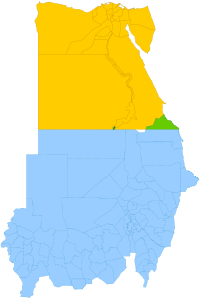