Rainforests are among the most biodiverse ecosystems on earth 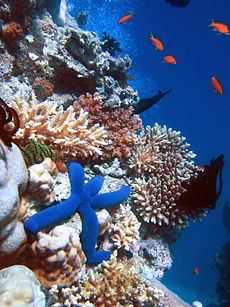 Some of the biodiversity of a coral reef 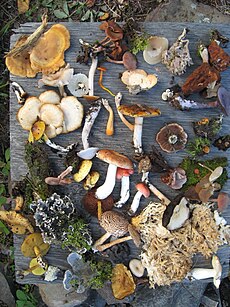 A sample of fungi collected in summer 2008 in Northern Saskatchewan mixed woods, near LaRonge. It is an example of the species diversity of fungi. In this photo, there are also leaf lichens and mosses

Biodiversity refers to the variety of life. It is seen in the number of species in an ecosystem or on the entire Earth. Biodiversity gets used as a measure of the health of the nature (the biological systems) in one place or region, and to see if there is a danger that too many species become extinct. The United Nations designated 2011–2020 as the "United Nations Decade on Biodiversity".

The term biological diversity was used first by wildlife scientist and conservationist Raymond F. Dasmann in 1968,[1] where he advocated conservation. It was widely adopted only in the 1980s.

Since then, the term is often used by biologists, environmentalists, political leaders, and citizens. A similar term in the United States is "natural heritage." It predates the others and is more accepted by the wider audience interested in conservation. Broader than biodiversity, it includes geology and landforms.

Biologists most often define biodiversity as the "totality of genes, species, and ecosystems of a region".[2] An advantage of this definition is that it seems to describe most circumstances. There are three levels at which biological variety can been identified:

The idea can be used for tackling practical problems in conservation, for example: