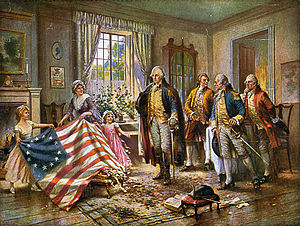 In The Birth of Old Glory by Percy Moran, Ross and her daughters present the first American flag to George Washington in June, 1776

Betsy Ross (1752-1836) is credited with having sewn the first American flag. She was born Elizabeth Griscom in Philadelphia, Pennsylvania to Quaker parents on January 1, 1752. When she became an adult, she operated her own upholstery business.

Ross was married three times. Her first husband was John Ross. Her second husband was mariner Joseph Ashburn. They had a daughter named Eliza. In 1783, she married John Claypoole and had five daughters by him. She died on January 30, 1836.

The story of Ross and the American flag became popular about 1876, the year of America's centennial. Americans were eager for stories of the country's past. She substituted five-pointed stars for Washington's six-pointed stars because five-pointed stars were easier to make. Ross has been promoted as a patriotic role model for young girls and a symbol of women's contributions to American history.