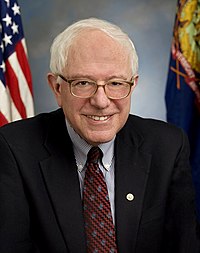 Bernard "Bernie" Sanders (born September 8, 1941) is an American politician. He was born in New York City. He is the United States Senator of Vermont since 2007. He ran for President of the United States, but lost the nomination to Hillary Clinton.