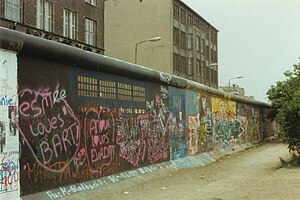 The Berlin Wall was a wall between East and West Berlin. It was built on the 13th of August 1961, and it was later torn down—the process of destroying it began in November 1989 with protesters tearing chunks off. The wall was finally properly demolished between 1990 and 1992.

The wall was more than 100 metres (328 feet) wide and contained many defences to stop people getting across, including gun towers, armed guards and trenches to stop vehicles like motorbikes and cars, from driving over or along it.