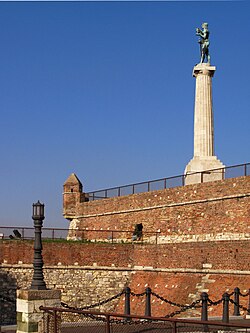 The Victor, one of the symbols of Belgrade, located on Kalemegdan fortress

Belgrade (Serbian: Београд/Beograd) is capital and the largest city of Serbia. It lies on the confluence of rivers Danube and Sava. As of 2011, the city had 1.233.796 inhabitants[1]

It is one of the oldest cities of Europe. First civilizations inhabited this area 4.800 years BC. The city was founded by Celts in 3rd century BC and later conquered by Romans and it was named Singidunum. Slavic name "Beligrad" (literally White City) the city gained in 878, thanks to the fact that stone used to build Belgrade Fortress was white.

Thanks to its good position, Belgrade was often through history target to many civilizations. It was destroyed and rebuilt for more than 44 times, and was held by about 15 civilizations. Most notable owners of the city were Romans, Austrians, Hungarians, Ottomans and Slavs. Thanks to that, city has a mix of Austrian architecture, with older historic buildings and forts in Ottoman architecture.