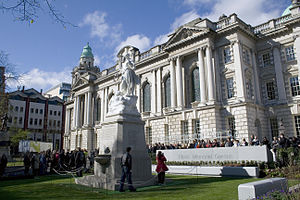 Belfast is a city in the United Kingdom. It's also the capital and the largest city of Northern Ireland, a part of the UK. The Irish name of Belfast is Béal Feirste.

For centuries, Belfast was inhabited by its original population. This population built a settlement with forts and a castle. English and Scottish people settled in Belfast in the 17th century. They colonized Belfast. Belfast became the centre of the linen industry and of the Irish Protestantism. There became a rupture between the Protestants and the Catholics. Between 1960 en 1997 there were a lot of fights between those two groups. A lot of people became injured and there were numerous attacks carried out by the IRA. Since 1997 there is a truce. That means that these fights stopped. These fights were known as the Troubles.

However, there is still a rupture between Protestants and Catholics in Belfast (or Republicans and Unionists). The two groups live in apart districts and go to different schools. To protect themselves the groups built Peace Walls. Peace Walls were built in 1969 for the first time. Otherwise than the Berlin Wall, you could enter the other side of the wall without checks. But a lot of people don't want to enter the other side. In 2013 it was decided that the Peace Walls would be removed by 2023.