Battle of the Monitor and the Merrimack 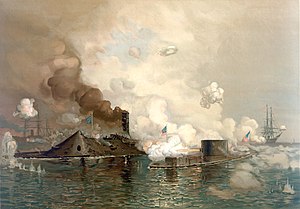 "The Monitor and Merrimac: The First Fight Between Ironclads", a chromolithograph of the Battle of Hampton Roads, produced by Louis Prang & Co., Boston, 1886

The Battle of Hampton Roads was a naval battle fought during the American Civil War. It is sometimes referred to as the Battle of the Monitor and the Merrimack. The battle was fought in Hampton Roads on March 8–9, 1862.

Hampton Roads is a place near Norfolk, Virginia where the Elizabeth and Nansemond Rivers meet the James River just before it enters Chesapeake Bay. The battle was a part of the effort of the Confederacy to break the Union blockade, which had cut off Virginia's largest cities, Norfolk and Richmond, from international trade.

The major significance of the battle is that it was the first meeting in combat of ironclad warships, i.e. the USS Monitor and the CSS Virginia. A victory was never attained. The ships did not fight again, and the blockade remained in place.