African boab, as it looks for most of the year.

Baobab is the common name of a genus of trees (Adansonia). There are eight species. Six species live in Madagascar, one in mainland Africa, and one in Australia. The baobab is the national tree of Madagascar.

Other common names include 'boab', 'boaboa', 'bottle tree', 'the tree of life', 'upside-down tree', and 'monkey bread tree'. The trees reach heights of 5 to 30 metres and trunk diameters of 7 to 11 metres. Its trunk can hold up to 120,000 litres of water. For most of the year, the tree is leafless, and looks very much like it has its roots sticking up in the air. 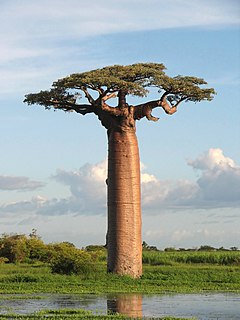 The trees are long-lived, but just how long is disputed. The owners of Sunland Farm in Limpopo, South Africa have built a pub called "The Big Baobab Pub" inside the hollow trunk of the 22 meters high tree. The tree is 47 meters in circumference, and is said to have been carbon dated at over 6,000 years old.[1]

The baobab tree is known as the tree of life, with good reason. It can provide shelter, clothing, food, and water for the animal and human inhabitants of the African savannah regions. The cork-like bark and huge stem are fire resistant and are used for making cloth and rope. The leaves are used as condiments and medicines. The fruit, called "monkey bread", is edible, and full of vitamin C.[2][3] 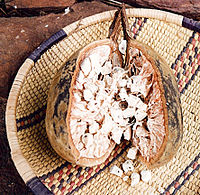 The fruit is about 18 cm long

The fruit has a velvety shell and is about the size of a coconut, weighing about 1.44 kg. It has a somewhat acidic flavour, described as 'somewhere between grapefruit, pear, and vanilla'.[4]

The tree can store hundreds of litres of water, which is an adaptation to the harsh drought conditions of its environment. The tree may be tapped in dry periods.[5]

Mature trees are usually hollow, providing living space for many animals and humans. Trees are even used as bars, barns, wine and beer shops and more.[6]