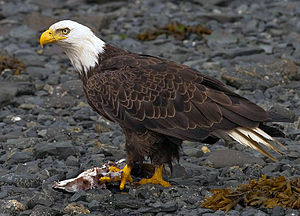 The bald eagle (scientific name : Haliaeetus leucocephalus) is a bird of prey native to North America. It is the national bird and the national animal of the United States. The population was once declining in the United States, but the species has recovered and removed from endangered species lists. 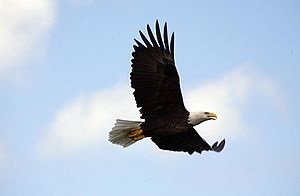 Bald Eagle in flight over the Kennedy Space Center

The adult bird is mainly brown with a white head and tail. The sexes are identical in plumage, but females are about 25 percent larger than males. The beak is large and hooked. The plumage of the young is brown. The call consists of weak staccato, chirping whistles, kleek kik ik ik ik, somewhat similar in cadence to a gull's call. The calls of young birds tend to be more harsh and shrill than those of adults 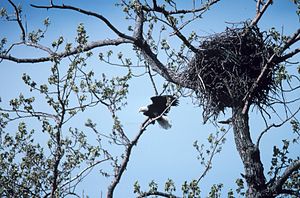 Bald eagle and its nest

The bald eagle builds the largest nest of any North American bird and the largest tree nests ever recorded for any animal species, up to 4 m (13 ft) deep, 2.5 m (8.2 ft) wide, and 1 metric ton (1.1 short tons) in weight.

Bald eagles are sexually mature at four or five years of age. Their courtship involves elaborate, spectacular calls and flight displays. The flight includes swoops, chases, and cartwheels, in which they fly high, lock talons, and free fall, separating just before hitting the ground.

Eagles produce between one and three eggs per year, two being typical. Both the male and female take turns incubating the eggs, but the female does most of the incubation. The parent not incubating will hunt for food or look for nesting material during this stage. Eggs hatch from mid April to early May, and the young fledge late June to early July.

Bald eagle chicks in a nest

The young eaglets pick up and play with sticks, play tug of war with each other, practice holding things in their talons, and stretch and flap their wings. By eight weeks, the eaglets are strong enough to flap their wings, lift their feet off the nest platform, and rise up in the air.

Juvenile eagles first start leaving their parents about 8 weeks after they fledge. Variability in departure date is related to the effects of sex and hatching order on growth and development. For the next four years, immature eagles wander widely in search of food until they attain adult plumage and are eligible to reproduce. 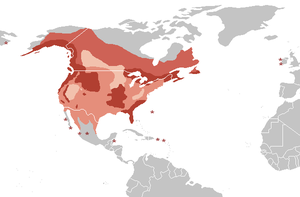 Map of the bald eagle's range

The bird's range includes most of Canada and Alaska, all of the continental United States, and northern Mexico. It is found near large bodies of open water with an abundant food supply. It prefers tall, old-growth coniferous or deciduous trees for nesting.

The eagle's hooked beak is used to tear food

The bald eagle eats mostly fish. To hunt fish, the eagle swoops down over the water and snatches the fish out of the water with its talons. The bird eats by holding the fish in one claw and tearing the flesh with the other.

Small mammals such as rabbits and raccoons may also be eaten if the opportunity arises. The bald eagle will aggressively defend its catch against animals such as coyotes and other birds of prey.

The average lifespan of bald eagles in the wild is around 20 years, with the oldest confirmed one having been 28 years of age. They may live longer in captivity. One captive eagle lived 50 years. Eagles die from a variety of causes in the wild including impact with wires and vehicles, trapping, hunting, electrocution, poisoning, starvation, disease, and other undetermined causes. Eagle-shooting is believed to be much reduced due to the protected status of the species.