From Vikidia, the encyclopedia for 8 to 13-year-old children that everybody can make better
(Redirected from Automobile)
Jump to: navigation, search 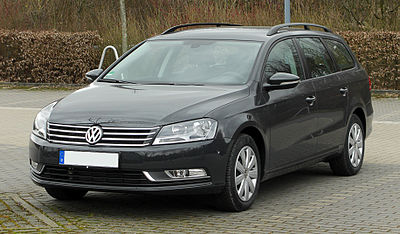 A car (or automobile) is a vehicle with four wheels operating with the help of an engine (gasoline, electric, natural gas, etc.), used as ground transportation for people and goods.

It's one of the most widespread ways of transportation on the planet. The name automobile means "that which moves on its own", in other words, originally, without the help of animals.

History of the automobile[edit | edit source]

The first automobile was a wooden frame with three wheels, moved by a steam engine, with a steering mechanism and rudimentary brakes, and a bench to sit on: in 1769, French engineer Joseph Cugnot invented a fardier à vapeur (steam dray), a heavy cart intended to carry cannons. The front wheel, which was also the drive wheel, supported the weight of the boiler. It is said that on the first try, the fardier knocked down a wall. This invention arrived too early to be useful and the idea was left to rest for a century. However it was the direct ancestor of trucks, automobiles and even locomotives.

In 1886, Carl Benz built his "Patent-Motorwagen", first automobile in history that moved with a reciprocating engine. Like modern cars, the Patent-Motorwagen had a piston engine, an electric ignition, a carburetor, a water radiator and a true chassis, made of steel.

Gottlieb Daimler had already made the first attempt at a wooden motorcycle in 1885. In 1886, he adapted gas engines to a canoe and a four-wheeled wooden carriage.

The first commercial cars appeared at the start of the 1890s, with the Benz Patent-Motorwagen series (which would later become Mercedes-Benz), then came the first automobiles from Peugeot, Renault and many others.

In order to reduce costs and sell more, Henry Ford, established in Detroit (United States), inaugurated the assembly line with the Ford Model T, simple and robust, easy to fix, which would remain almost unchanged for almost two decades, from 1908 to 1927.

These cars with wooden artillery wheels were used up till the 1940s for field work in the American countryside, often turned into pickup trucks by a simple addition of a wooden box in the back. The motor was large (2.9 L capacity), consumed a lot (15 to 18 L of fuel for 100 km), but it didn't matter, since during that time, American petroleum was abundant. The car could reach speeds of 72 km/h.

Traction Citroën, starting production in 1934, has a number of innovations that are present in current cars unibody (no frame), aerodynamics and low height, overhead valve engine (top of the engine), FWD (front wheel drive), hydraulic brakes The Traction holds the road, goes faster, and consumes less. Depending on the version, it goes from 95 to 130 km/h Only the DS manages to dethrone it, starting in 1955

Volkswagen holiday with portable radio, circa 1938.

Volkswagen ("People's Car" in German) wants to be the car for everyone It was unveiled in 1936, but will not actually made ​​until 1948 With its two-door body, its rear engine air-cooled, its hard suspension and bad handling, it is the opposite of the Traction, but it will serve as a model for other small cars with rear engines, very popular until the 1960s, like the 4CV Renault Dauphine or the Simca 1000.

Automobiles have different body types according to their use:

The engine drives either the front wheels (pull) or the rear wheels (push) or all-wheels (4 x 4).

One way to freedom[edit | edit source]

Most often, the car is considered personal transportation.

A car can transport two to nine people, but carries an average of one or two people. It allows you to go where you want and when you want, making it easier than public transportation (like the bus).

The automobile and the environment[edit | edit source]

It is generally polluting (emission of greenhouse gases such as carbon dioxide).