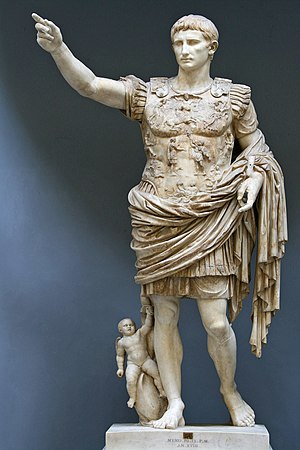 Augustus (Gaius Julius Caesar Augustus, 23 September 63 BC – 19 August AD 14) was the first and one of the most important Roman Emperors. He was originally named Octavian and was the adopted son of Julius Caesar.

Octavian was voted as Emperor by the Senate following the battle of Actium in 31 BC. He took the name "Augustus" (which meant 'exalted').

Augustus led Rome in its transition from a Republic to a great Empire. He ruled until AD 14, when his stepson and son-in-law Tiberius became Emperor in his place.