The Asian elephant (scientific name : Elephas maximus) is the only living species of the genus Elephas. This species is distributed in southeast Asia from India in the west to Borneo in the east.

The Asian elephant has small ears compared to the African elephant. The elephant can be tamed and is used in Asia for lumbering and passenger transport. It also has a function in ceremonial processions. It appears in zoos and circuses. 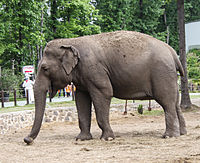 Elephant in the Nyíregyháza Zoo

Asian elephants are different from African elephants. They are smaller, have smaller ears, a more rounded back, and a fourth toenail on each of their back feet. They have thick, dry skin with a small amount of stiff hair, and are grey to brown in color. Female Asian elephants have small tusks and occasionally none at all. Sometimes pink spots appear on the ears as a result of loss of pigment (depigmentation).

In the modern world, the Asian elephant occurs in Bangladesh, Bhutan, India, Nepal, and Sri Lanka in South Asia, and Cambodia, China, Indonesia (Kalimantan and Sumatra) Lao PDR, Malaysia (Peninsular Malaysia and Sabah), Myanmar, Thailand, and Viet Nam in Southeast Asia. Most of the populations occur on some of the Andaman Islands (India). They live in a variety of habitats including dry places and moist humid jungles.

Asian elephants live in groups of 5-18 individuals. Groups may merge with other groups to form clans and herds. The group is led by the oldest and most experienced female in the group. She is called the matriarch.

When a male elephant is mature, the females force him out of the herd. Mature males live alone or in bachelor groups. These males only mix with the females to mate. It takes up to 660 days or 22 months until the babies are born.