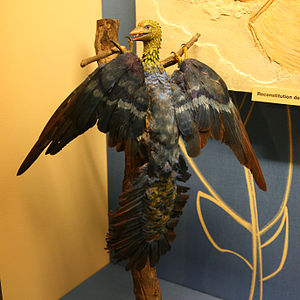 The Archaeopteryx eats on the following animals which were amphibians, mammals, insects and small reptiles

The Archaeopteryx was the size of a common raven (Crow). It has feathers that were similar to common birds now. The bird like dinosaur had hallow bones similar to birds