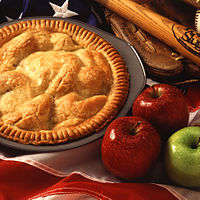 American icons of wholesomeness: baseball, the flag, and apple pie

Apple pie is an American dessert. It consists of a pastry crust made of shortening, flour, and salt. Half the crust is placed unbaked in a pie pan. Slices of apples covered with flour, sugar, salt, nutmeg, and cinnamon are added to the pastry crust. The whole is dabbed with butter, and then covered with the other half of the crust. The pie is baked until the juices are bubbly and the crust is golden brown.

American tradition holds that the first apple pie was prepared by a slave at Mount Vernon and served to George Washington. Apple pie is a symbol of innocence and wholesomeness in American pop culture.