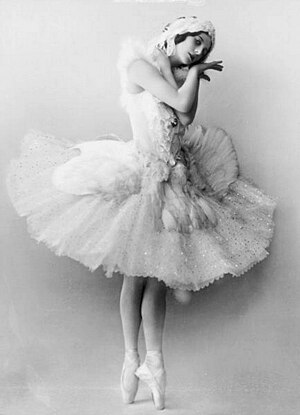 Pavlova as the Dying Swan

Anna Pavlova was a ballerina. She was born on 12 February 1881 in Saint Petersburg, Russia to unwed parents. She entered the Imperial Ballet School at age 10, and graduated in 1899 at age 18. She was named prima ballerina in 1906 after her performance in Giselle.

In 1905, she danced the Dying Swan. This role became universally identified with her. In the early 20th century, she founded her own company. In 1912, she settled in London, and proved instrumental in developing British ballet. She danced in the United States between 1914 and 1917.

Pavlova died on Friday 23 January 1931 about 12:30 am. She was cremated, and her ashes placed in a columbarium at Golders Green Crematorium. For many years, it has been suggested that her cremains be sent to Russia.