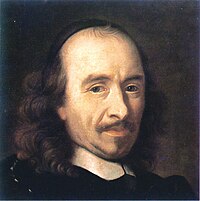 Andromède is Pierre Corneille's play, represented for the first time on January 13th, 1650 in Paris.

It is a tragedy with machines: a very fashionable genre in the XVIIth century, which consists of a tragedy containing many special effects made to amaze and impress the spectator.

The play contains five acts and a prologue.

Summary of the play[edit | edit source]

The play tells the story of Andromède and Perseus. It takes place in Ethiopia.

Perseus is a Greek hero who was in charge of killing the Jellyfish, a witch with hair mixed with snakes. Whoever cross her look is transformed into stony statue. However, Perseus manages to beat her, and goes back home, via the kingdom of Ethiopia, by having with him the head of the Jellyfish.

The prologue celebrates the glory of Louis XIV, saying: " Louis is the youngest and the biggest kings ". Louis XIV was then only 11 years old;

During the act I, we see the queen of Ethiopia, named(appointed) Cassiope, discussing with Perseus, a Greek hero about whom the queen does not know much. The queen confides to the hero that she makes feel guilty: indeed, terrible misfortunes came down on the country. Indeed, a marine monster sent by Poseidon kills numerous inhabitants of Ethiopia. So why? Because Cassiope, during feast day, because we got ready to marry his daughter Andromède to her cousin Phinée, declared that Andromède was more beautiful than the Nereids, creatures of the sea escorting Poseidon.

The inhabitants consulted then an oracle, which tells them that to calm the anger of the god of the Sea and Earthquakes, it is necessary to offer a victim every month to the marine monster which terrorizes the kingdom.

During this discussion, king Céphée and Phinée join Cassiope and Perseus. King scolds his wife, when suddenly, in the sky, appeared a star on which appeared Venus, the goddess of the beauty. The goddess tells then to king to calm her anger: there will not be more than a single victim to offer to the marine monster. She adds that Andromède will soon get married with " the illustrious husband who only deserves her ". Then disparait stud him.

Phinée lets burst his enjoyment, because he is sure to be the illustrious husband of Andromède. He runs to announce the good news to his fiancée.

From her part, Céphée goes away and goes to the temple, to attend the drawing lots of the last victim.

Céphée admits then to the queen that he is madly in love of Andromède.

The set of this act is a garden where Andromède and her partners discuss by braiding flower crowns. Andromède speaks about Perseus, and admits that if she was not already in love with Phinée, she could like these foreigner.

Suddenly, the captain of guards, of the palace enters the garden. She announces that the drawing lots indicated Andromède as the next victim of the monster..

His parents soon arrive, to see Andromède. She is quiet and resigned, and agrees to die to save the inhabitants of the kingdom of the marine monster. IShe is taken by two winds which chain him to a rock overhanging the sea. Perseus, immediately, rushes to her rescue.

The monster approaches and gets ready to devour Andromède, when Perseus, on the back of Pegasus, arrives and fights the monster, which soon dies.

Andromède was delivered, we prepare the wedding of the princess with Perseus. Indeed, his parents are now convinced that it is him, the hero announced and deserving of their daughter.

Perseus asks then for theis hand Andromède, who reveals him none of its loving feelings to him. Perseus, then, leaves.

Andromède announces then to her partners that her feelings changed : she loves Perseus, and, on the other hand, Phinée disgusts her. Exactly; he arrives. Andromède looks up and down him, and blames him for not having helped her. Furious, Phinée does not more think than of killing Perseus. He thus gathers an army to realize this project.

Perseus is praying in a temple. From their part, Phinée and one of his friends, are ready to kill the hero.

In another place, king Céphée joins Cassiope and Andromède. Suddenly, a partner of Andromède arrives, and shouts to Céphée that the army of Phinée is fighting Perseus. As Cassiope asks to the guards of the palace to help Perseus, a messenger arrives and tells that Perseus managed to kill Phinée and his army: he brandished the head of the Jellyfish, which, even dead, changed the soldiers in stony statues.

Source : this page has been adapted from the page « Andromède (pièce de théâtre) » on Vikidia in French. (Authors list)
Retrieved from "https://en.vikidia.org/w/index.php?title=Andromède&oldid=78541"
Category:
Hidden category: