One of Amsterdam's canals

Amsterdam is the capital of the Netherlands. It has more than 780,000 inhabitants and 2.3 million within its agglomeration. Despite Amsterdam being the Dutch capital, the government and the king reside in The Hague.

In the 17th century Amsterdam flourished. At that time, the Netherlands had trade routes all across the globe. In Amsterdam, the ships unloaded their freight, mainly consisting of spices, but also silk, silver and other foreign products. It was the first port in the world.

"Amsterdam" is named after a dam in the Amstel river. Amsterdam was originally called Amstelerdam (the dam at the Amstel). 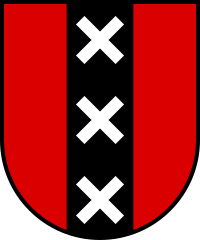 Amsterdam has become famous for its canals (Dutch: grachten). In the 17th century, rich merchants built their big town houses along them, the so-called "grachtenpanden" or "herenhuizen". Another reason why many tourists visit Amsterdam are the museums, the coffee shops (where you can smoke weed) and the Red Light District.

April 27 is it kings Day, the name is "Koningsdag". All the holland dresses up with orange color. The party is celebrated in Amsterdam. 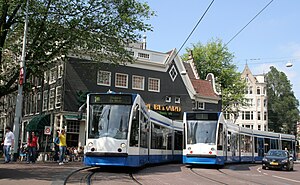 Amsterdam is served by 15 tram lines, 3 subway lines, 1 light rail line, 5 ferries and 33 bus lines. The public transport company is the GVB. Close to the city lies the biggest airport of the Netherlands, Amsterdam Airport Schiphol. In Amsterdam there are many bikes, The Netherlands are one of the best country's in the world for bikes!

Many people describe Amsterdam as a English speaking city because a person who visit Amsterdam hears a lot of English and not so much Dutch and sometimes only English. But even if a tourist or expat is in Amsterdam local people are glad if someone from abroad learn some Dutch also respect for the culture because Dutch is the official language in the Netherlands.