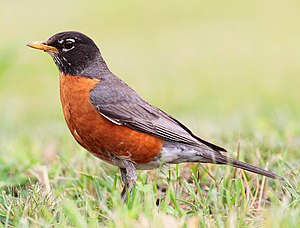 The bird has a reddish-orange breast, and a black head. Its plumage is generally grey to brown. Robins are famous for eating earthworms. Its nest is made of twigs and grass with mud holding it all together. Its eggs are a pale blue. Four chicks are the usual number of offspring. The American robin is preyed upon by hawks, house cats, dogs, and other predators.

The robin has a very distinctive song that is heard at dawn and just before sunset. In the United States the song, "When the red, red robin comes bob, bob, bobbing along", is a favorite with children. Many Americans believe that their first sighting of a robin after a long winter marks the beginning of spring.