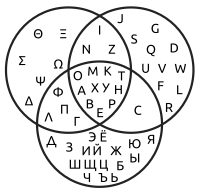 Venn diagram which shows that 11 characters are common to the Greek, Latin and Russian alphabets (upper case letters)

An alphabet is a writing system, a list of symbols for writing. The basic symbols in an alphabet are called letters. In an alphabet, each letter is a symbol for a sound or related sounds. To make the alphabet work better, more signs assist the reader: punctuation marks, spaces, standard reading direction, and so on.

The name alphabet comes from Aleph and Beth, the first two letters in the Phoenician alphabet.

The alphabet in this article is the Roman alphabet (or Latin alphabet). It was first used in Ancient Rome to write Latin. Today many languages also use the Latin alphabet: it is the most used alphabet today.

A list of alphabets and examples of the languages they are used for:

It seems that the idea of an alphabet – a script based entirely upon sound – arose only once, and has been copied and adapted to suit many different languages. [1]p12 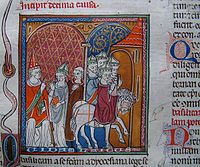 Our alphabet is called the Roman alphabet, as compared with the Cyrillic and other alphabets. All of these come from the ancient Greek alphabet, which dates back to about 1100 to 800BC.[2]p167 The Greek alphabet was probably developed from the Phoenician script, which appeared somewhat earlier, and had some similar letter-shapes.

The Phoenicians spoke a Semitic language, usually called Canaanite. The Semitic group of languages includes Arabic, Maltese, Hebrew and also Aramaic, the language spoken by Jesus. We do not know much about how the alphabetic idea arose, but the Phoenicians, a trading people, came up with letters which were adapted by the early Greeks to produce their alphabet. The one big difference is that the Phoenician script had no pure vowels.

No ancient script, alphabetic or not, had pure vowels before the Greeks. The Greek alphabet even has two vowels for 'e' and two for 'o', to distinguish between the long and short sounds.[3] It is fairly clear from this that careful thought went into both the Phoenician invention and the Greek adaptation, but no details survive of either process.[4]

Semitic scripts apparently derive from Proto-Sinaitic, a script of which only 31 inscriptions (plus 17 doubtful) are known. It is thought by some researchers that the original source of this script was the Egyptian hieratic script, which by the late Middle Kingdom (about 1900BC) had added some alphabetic signs for representing the consonants of foreign names. Egyptian activity in Sinai was at its height at that time.[5] A similar idea had been suggested many years previously.[6]