From Vikidia, the encyclopedia for 8 to 13-year-old children that everybody can make better
(Redirected from Alice in Wonderland)
Jump to: navigation, search

Lewis Carroll (self portrait) in 1856 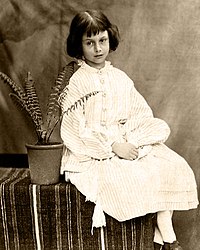 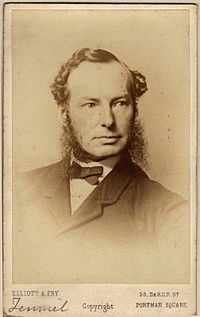 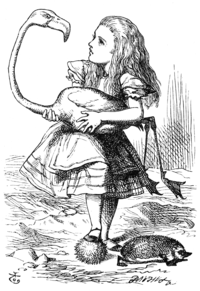 Alice's Adventures in Wonderland is a children's book by the Reverend Charles Lutwidge Dodgson. The title is sometimes shortened to Alice in Wonderland. The book was published by Macmillan in November 1865 under Dodgson's pen name, Lewis Carroll. John Tenniel drew the story's 42 black and white pictures. The book was followed a few years after its publication with a sequel (also starring Alice) called Through the Looking-Glass. Both books have been translated into many languages, and adapted to other media such as movies, plays, and television shows.

Charles Lutwidge Dodgson was a young professor of mathematics at Oxford University, England, when the story of Alice began to take shape in his imagination. He had several child friends at Oxford including 10 year old Alice Pleasance Liddell, the daughter of the dean of Christ Church. On 4 July 1862, Dodgson and his friend, the Reverend Robinson Duckworth, took Alice and her sisters, Edith and Lorina, on a five-mile boating trip from Oxford to Godstow on the Isis River. Dodgson passed the time during the journey telling the story of Alice and Wonderland. Alice asked him to write the story down. He did, and gave the manuscript to her in November 1864. In 1863 (and most of 1864), Dodgson elaborated the story until he was satisfied with it. He read the story to other children. They liked it, so Dodgson began preparing his manuscript for publication. He asked the artist John Tenniel to draw pictures for the story. Tenniel drew 42 black and white pictures. Macmillan published the novel in November 1865 under Dodgson's pen name, Lewis Carroll.

The story is about a little girl named Alice. She is enjoying a summer day on a river bank with her older sister when a rabbit runs by. Alice runs after him and falls down his rabbit hole. What she finds underground is a world of nonsense and wonders.

Anything Alice eats or drinks causes her to grow or to shrink. Sometimes she grows so small she is almost invisible, and other times she grows so tall she disappears in the clouds. She meets many odd characters in Wonderland, such as the White Rabbit, the Dodo, the Caterpillar, the Duchess and her Cook, and the Cheshire Cat.

Alice joins a Mad Tea Party hosted by a March Hare, a sleepy Dormouse, and the Mad Hatter. At the end of the story, Alice plays croquet with the Queen of Hearts. A great trial is held to punish the Knave of Hearts for stealing the tarts from the Queen . At the trial, Alice soars to a great height, then suddenly finds herself on the river bank where the story started. Alice's adventures were all a dream.

The book was hugely popular upon publication, and is still very popular. Another book about Alice called Through the Looking-Glass was published in 1871. This book was also written by Carroll, and was also very popular. The Alice stories have been adapted to stage plays, musicals, animated movies and live-action movies, such as Walt Disney's animated Alice in Wonderland (1951) and Tim Burton's computer-generated animation and live-action movie, Alice in Wonderland (2010).