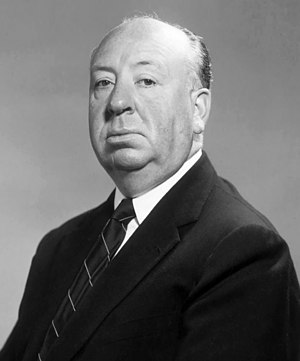 Hitchcock was born on 13 August 1899 at Leytonstone, Essex, England, and died of renal failure on 29 April 1980 in Bel Air, California, United States. He was Roman Catholic, and married Alma Reville in 1926.

They had one daughter, Patricia.

Hitchcock pioneered many techniques in the suspense and psychological thriller genres.

The magazine MovieMaker has described him as the most influential moviemaker of all time, and he is widely regarded as one of the most significant artists in moviemaking.

From 1955 to 1965, Hitchcock was the host and producer of the television series, Alfred Hitchcock Presents.

His name was also used for decades on mystery series books and magazines, and a children's mystery series, The Three Investigators.

His movies include Psycho, Rear Window, The Lodger, Spellbound, North by Northwest, Stage Fright, Dial M for Murder, Rebecca, The Birds, and Vertigo.