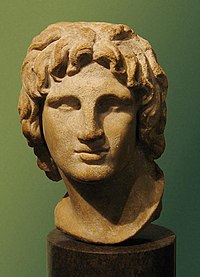 Sculpture of Alexander the Great

Alexander the Great (356 BCE-323 BCE) was King of Macedonia and conqueror of the Persian Empire. He is considered one of the greatest military geniuses of all time. He is also known as Alexander III the Great.

Alexander was born in 356 BCE in Pella, the capital of Macedonia. He was son of Philip II, King of Macedonia, and Olympias, the princess of neighboring Epirus.

Alexander spent his childhood watching his father transform Macedonia into a great military power wining victory after victory on the battlefields throughout the Balkans.

When he was 13, Philip hired the Greek philosopher Aristotle to be Alexander's personal tutor. During the next three years, Aristotle gave Alexander a training in rhetoric and literature, and stimulated his interest in science, medicine, and philosophy, all of which became of importance in Alexander's later life.

In 340 BCE, Philip assembled a large Macedonian army and invaded Thrace. He left 16 year old Alexander with the power to rule Macedonia in his absence as regent. But as the Macedonian army advanced deep into Thrace, the Thracian tribe of Maedi bordering north-eastern Macedonia rebelled and posed a danger to the country.

Alexander assembled an army, led it against the rebels, and with swift action defeated the Maedi, captured their stronghold, and renamed it Alexandropolis.

Alexander became king of Macedonia in 336 BCE when his father was assassinated. He was awarded the generalship of Greece and used this authority to launch his father's military expansion plans.

In 334 BCE, he invaded Persian-ruled Asia Minor. He began a series of campaigns that lasted ten years. Alexander broke the power of Persia in a series of decisive battles, most notably the battles of Issus and Gaugamela. He overthrew the Persian King Darius III and conquered the entire Persian Empire. At that point, Alexander's empire stretched from the Adriatic Sea to the Indus River.

He invaded India in 326 BCE, but was forced to turn back at the demand of his troops. Alexander died in Babylon in 323 BCE, of unknown causes. Poison, murder, or a fever after a battle have all been suggested. At his death, he was planning a series of campaigns that would have begun with an invasion of Arabia.

In the years following his death, a series of civil wars tore Alexander's empire apart. Several states were then ruled by the Diadochi, Alexander's surviving generals and heirs. The largest were the Seleucid Empire and the Ptolemaic Kingdom in Egypt.

Conscious of the diversity of the peoples who lived in his empire, Alexander tried to meld them into single people. For that purpose, throughout his expedition towards India, he created cities where he settled European soldiers who would marry natives. Alexander, his friends, and his officers married Persians in a gigantic ceremony at Suse in 325 BCE.

Continuing the tradition of Persian Empire, Alexander lets the conquered peoples freely practise their religions. But the Greek religion is introduced at the heart of western Asia.

Alexander promoted the birth of a new civilization based on the fusion of the cultures of East and West. The brevity of Alexander's life did not allow him to realize this goal. His successors however did reach this goal. It was called the Hellenistic period. It lasted until the Roman conquest of these countries.