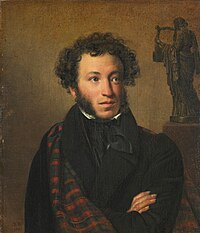 He was born into a noble family. But he believed in revolution. Because of this, the government sent him away to live in exile. The police constantly watched him because the government did not trust him.

But during this time he wrote poems like Ruslan and Ludmila and his most famous piece Eugene Onegin. He wrote a famous play Boris Gudunov.