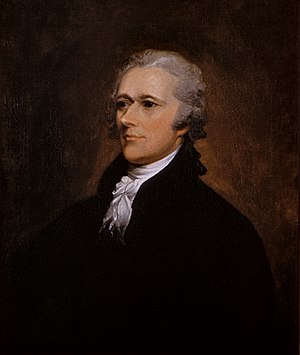 He was born on the island of Nevis in the Caribbean Sea and was active in the military during the American Revolutionary War. He made the economic policies during the time George Washington was president. He established the national bank and friendly trade relations with Britain. His main opponent was Thomas Jefferson. Although they had different views on politics, Hamilton choose the side of Jefferson instead of Aaron Burr by the electoral college. When Burr later ran for governor of the state of New York in 1804, Hamilton campaigned against him. The two fought a duel on July 11, 1804, in which Burr shot Hamilton. Hamilton was mortally wounded and died the following day.