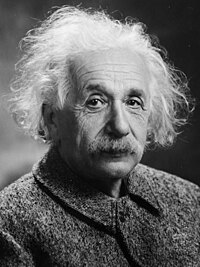 Albert Einstein is one of the most famous scientists from about a hundred years ago. He became widely renowned and very well known around the world in a time before people had Electronic Computers and the Internet. He lived between March 14th,1879 and April 18th, 1955. He was born in Ulm, Germany; he died (deceased) when he was 76 years old in New Jersey, in the United States of America.

He was most famous for the equation E=mc2. This basically tells about the relationship between mass and energy and how they are basically the same thing in different forms (or states.)

Einstein was also very famous as the creator / inventor / discoverer of two main theories (a theory is an idea that is a way of explaining the world and universe.) These were called the theories of Special Relativity and General Relativity.

Einstein also won the famous and prestigious scientific award called a Nobel Prize for his work explaining the physics of the Photoelectric Effect.

Einstein was involved with very early Atomic research which studies atoms and light, (or mass-particles and energy-particles) and directly urged and influenced the creation of the first Atomic bomb, as a race to beat Hitler and his Nazi forces from using them first, and taking over Humanity or destroying the Earth, during the second World War.

Einstein went on to accomplish many incredible theories, discoveries, predictions, and scientific research papers that actually uncovered many new things for the time that led to more new types of science. It might be important to note that all things in science used to be considered just science fiction and fantasy until people actually discovered it and learned.

After Einstein died his brain was removed from his body against his wishes, by scientists who wanted to study it. And for 50 years his brain traveled around before being properly studied.