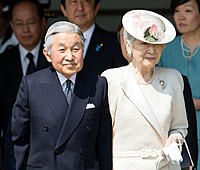 Akihito was educated by Japanese and Western teachers. In 1959, he was the first member of the imperial family who married a woman who was not noble. This has helped to modernize the image of the imperial family. Akihito and his wife Michiko Shoda have two sons (including Crown Prince Naruhito) and a daughter.

He became emperor in 1989 after the death of his father, Emperor Hirohito. According to the Japanese Constitution, he doesn't have any political power. Akihito is the first Japanese emperor making numerous trips and official visits abroad, unlike its predecessors.

Akihito is also a specialist of ichthyology (the study of fishes).

He abdicated in 2019, and his eldest son Naruhito became the new emperor of Japan.