Airbus is a multinational aerospace company. It was founded on December 18, 1970. Its biggest airplane model is an Airbus A380 which was ceased production on December 16, 2021. Airbus' last aircraft

model is the Airbus A321XLR. Today Airbus is making the A320neo family. NEO means New Engine Option. The Airbus A330 has been the best-selling widebody airplane for Airbus. 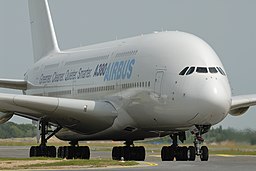 A380 is the company's biggest airplane model. Emirates is the company that has the most of them. It have two floors and it's the biggest passenger plane. It have two engines on its first wing and two on its second wing, which totals four engines.

A350 is last passenger plane from Airbus. This widebody plane has just one floor and two engines on both wings.

The Airbus A330 has been the best-selling widebody airplane for Airbus. It's a widebody plane with two engines on each of its two wings. Turkish Airlines is the airline which have most of A330 model, owning over 60 of them.

Airbus A320 is Airbus' best-selling airplane. It's a narrow-bodied airplane with two engines on both wings. Today Airbus selling A320neo.

Airbus A300 is a widebody airplane. This is first airbus airplane with two engines on both wings. It was presented in 1974.

NEO or New Engine Option the family of narrow-body A320 airplanes produced today by Airbus.