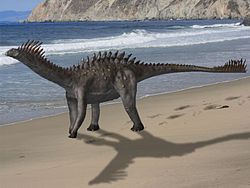 The Agustinia is a Sauropod. It looked like a combination of a stegosaur, an ankylosaur, and a porcupine. On her skin was an armor-like bony lumps, called osteoderms and her back with two rows of spikes that stuck out sideways. Some spikes were up to 29 inches (75 cm) long. It could also have spikes on her tail and possibly on her neck. Agustinia is only known from the parts of her skeletons. Some discoveries of new fossils may lead scientists to believe it looked even more strange than we think today.