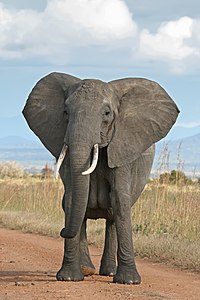 The African elephant is an elephant of the genus Loxodonta. The genus consists of two living species: the African bush elephant and the smaller African forest elephant.

The bush elephant is the largest living land animal. The forest elephant is the third largest. African elephants live in eastern, southern and western Africa. They live in dense forests, woodlands, scrublands, or deserts.

African elephants live in family groups called herds. These herds are led by the oldest and most experienced female called the matriarch. Mature males form groups apart from the females and young.

African elephants may eat up to 992 lb of plant material every day. Only 40 percent of this food is properly digested. They use their trunk to pluck at leaves and their tusks to tear at branches, which can cause enormous damage to foliage.