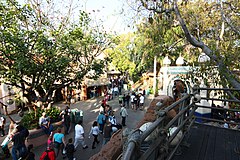 Adventureland is a part of Disneyland located in Anaheim, California, United States.

Adventureland is one of the "themed lands" that are at Disneyland-style theme parks. The parks are run by the Walt Disney Company around the world. Adventureland is themed to look like the remote jungles in Africa, Asia, South Pacific, and the South America. "To create a land that would make this dream reality", said Walt Disney, "we pictured ourselves far from civilization, in the remote jungles of Asia and Africa."[1]