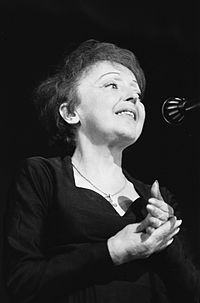 She had much unhappiness, sickness, and accidents in her life.

Her mother, a singer, gave her up when she was born. Her father, an acrobat, took her on his circus tours.

When she was young, she was blind for a while from an illness called meningitis.

She sang for money in the streets until a cabaret owner gave her a job in music halls.

During World War II she sang for French prisoners.

Later she toured the world as France's top paid performer.